"Well, I have this outline lying around ..." 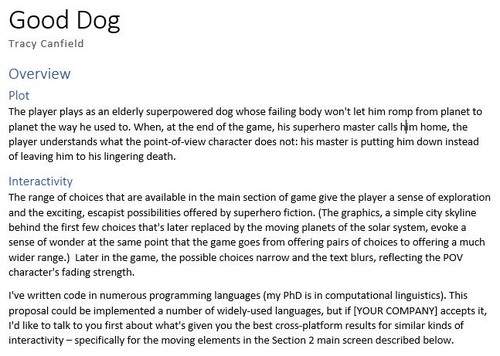 "Good Dog" takes just fifteen minutes to play, but I wrote a detailed nine-page outline before I started coding. Overkill? Maybe – but the game only exists because I wrote that outline! If you're starting your own game project – or if you've already started, and are finding yourself bogged down in details – writing an outline now can save you from a lot of headaches down the road.

In 2019, I wrote the "Good Dog" proposal and submitted it to a company that was buying interactive short stories. I knew going in that if they said no, that was probably the end of the line for this project. When a short story gets rejected, you can usually sell it somewhere else - but there aren't many publishers for interactive short fiction.

The company said no, and I just … completely forgot about the whole thing until October of 2020. Maybe if I go ahead and code it, I thought, people will stumble on it and enjoy it.

(I can't attach the whole document, but here's a screenshot for the benefit of any digital archeologists from the 25th century who've never seen a Microsoft Word document.)

The outline does two things. First, it gives the reader a very clear idea of what it would be like to play the game: what text they'll see, what the screens look will like, and how the gameplay serves the story. Second, though, this particular proposal is also a pitch. It's intended to convince a specific set of people (in this case, the editorial team) that their readers would enjoy this story enough to justify writing me a check.

Even if you're an independent developer who doesn't need an editor's approval, you might find it useful to write an outline like this. I was able to pick the outline up a year later and use it as a blueprint to jump straight into coding.

"Good Dog"'s outline starts with a brief sum-up of what the story's about.

Plot
The player plays as an elderly superpowered dog whose failing body won't let him romp from planet to planet the way he used to. When, at the end of the game, his superhero master calls him home, the player understands what the point-of-view character does not: his master is putting him down instead of leaving him to his lingering death.

The plot summary doesn't just tell you what happens – it tells you why you should care and what a player will take away from the story. And since the "superpowered dog" concept is right up front, an editor who's not interested can tap out right away.

I would actually suggest writing down the heartof the story even if you're the only person who'll ever see the outline. Here, I called that heart "plot", but your game's heart could include the tone (is the story creepy? optimistic? whimsical?), a central idea that the story explores, or the kinds of rewards a player gets from the game.

As you work on the game, you'll start making changes. And sometimes, doing things one way fits with the core of what your story is about – but doing things a different way changes what's at its heart. Maybe you'll like the new concept better. Or maybe you'll decide your the original idea is stronger.

But here's what you don't want to happen. I've read through multiple drafts of project proposals (and fiction) where an author kept incorporating feedback from editors and beta readers, and new ideas that cropped up along the way, and ended up with … nothing; just a bad version of a project no one wanted, not even the author. "Everything that got me interested in the first place is gone," they'll say.

It doesn't have to be that way! Instead of saying "I can work X in, I'll just have to change Y and Z", you can ask: what does X do for the story I want to tell? How does changing Y and Z affect that story? What if I change A and B instead?" When you think about your story's heart, you'll be able to see when a revision would make your story better ... and when it takes away what makes your story special.

Why write a game instead of a short story?

"Good Dog" isn't the kind of interactive story where you sit around clicking "Continue" until it's done. The game elements are simple, but they're all there for a reason: to give the player a sense of what it's like to be this amazing creature whose life is coming to an end.

Interactivity
The range of choices that are available in the main section of game give the player a sense of exploration and the exciting, escapist possibilities offered by superhero fiction. (The graphics, a simple city skyline behind the first few choices that's later replaced by the moving planets of the solar system, evoke a sense of wonder at the same point that the game goes from offering pairs of choices to offering a much wider range.)  Later in the game, the possible choices narrow and the text blurs, reflecting the POV character's fading strength.

Overall look and feel
The choice text is either centered on the screen, or – on the Solar System page – placed above moving celestial objects, and is in small caps. The descriptive text preceding a choice uses normal prose capitalization. It is left-justified with blank lines between paragraphs and no first-line indentation.

The background art is minimal but evocative – a jagged line on either side of the text to suggest a cityscape, a golden orange background color for the surface of the sun, a cool grey background for the surface of the moon, etc. When the solar system and its moving elements are seen, the elements are simple, though identifiable: a large golden orange circle for the Sun, a smaller reddish circle for Mars, a white-swirled blue circle with visible white polar regions for the Earth, et cetera.

When I wrote the outline, I hadn't decided what language I was going to use for the game. But I did know that the story was going to be text-driven, and the other elements needed to enhance the text instead of detracting from it.

A story can't speak for itself if it doesn't exist yet

When you're selling prose fiction, you usually don't describe a story in its cover letter. The editor is going to make a decision based on the words on the page, not how great you said those words were going to be.

Obviously there's no reason to persuade yourself that your project is worthwhile, so this is something most outlines won't need to do.

Most of the rest of the proposal is the actual script. For a short game like "Good Dog", you can to write the whole script before starting. (For a longer project, like my 300,000-word game I, Cyborg, the script is the project. It would make more sense to have a chapter-by-chapter outline and a sample section.)

Here's the script for the first two pages.

Black text on a white background, with a jagged line above a horizontal line on either side of the text suggesting a city skyline.

A short series of binary choices. While the text following either choice differs, the story in this section doesn't fork; the same choices occur in the same order on every playthrough.

The Chrysler Building's proud spire crowns the New York City skyline. Its Art Deco façade has been serving up interesting smells ever since you were a puppy.

Choice: Sniff it
Over the years, how many pigeons have you chased off this spire and across the sky? There's not a whiff of them today, though.
The building smells like a faint scent on a faraway breeze even when you lower your nose to the stone. That's how it is these days.

Choice: Piss on it

You lift your leg and take a leisurely whiz on the tip of the spire. Down on the streets, all the dogs of New York City are trying to make their marks – but you've always had the Chrysler Building spire to yourself.
You can't quite stop dribbling when you're done. That's how it is these days.

[We set a variable based on your choice here so that we can call back to it later in this section.]

When I started coding, I could cut and paste text directly from the outline. It was my first Twine project, but even before I knew what tags were for I felt I could safely guess that I could tag all my scenes with locations like "earth", "jupiter", "moon", et cetera, and be able to use those tags later to style the pages consistently. (I was right, too!)

I won't through the script section by section - after all, you can play the game in the same amount of time it'd take to read the script! But I do want to point out how those first few sentences dole out the key information about the setting.

That first little two-sentence paragraph tells the player "you're a dog". Whichever ordinary doggy choice you make, you find out something new: you're a flying dog, and a rather elderly one. It builds up basic concept – "aging superhero dog" – in a way that's surprising and fun.

Next time: picking a framework and starting to code! (spoilers: it's a Twine game)

The sad, sweet story of a dog who's getting too old to save the world.